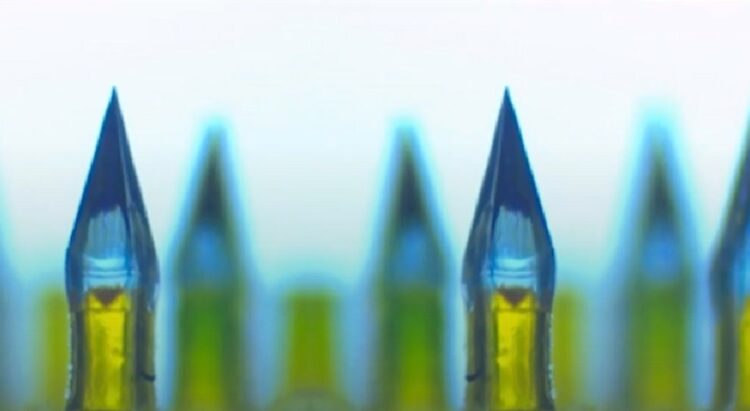 (Press Release) February 1, 2021 — Newscope Capital Corporation (CSE:PHRM) (OTCQB:PHRRF), who through its wholly-owned subsidiary, PharmaTher Inc., is a specialty life sciences company focused on the research and development of psychedelic pharmaceuticals, is pleased to announce that PharmaTher has entered into an Exclusive Worldwide Patent and Know-how License Agreement with The Queen’s University of Belfast (“QUB”) for the development and commercialization of a patented hydrogel-forming microneedle delivery technology developed by Professor Ryan Donnelly to support PharmaTher’s product and clinical development initiatives with ketamine.

With this exclusive license we have created a solid intellectual property foundation and a development and commercialization path for KETABET™ MN patch… We are pursuing the clinical development of KETABET™ MN patch to overcome the current limitations of ketamine and to unlock the known potential therapeutic value of ketamine as a prescription for regulatory approval worldwide.

Most recently, Professor Donnelly’s lab successfully completed research and published a paper titled “Hydrogel-forming microneedle arrays as a therapeutic option for transdermal esketmaine delivery” validating the delivery of esketamine, the the S(+) enantiomer of ketamine, in a novel
microneedle patch which may overcome the drawbacks associated with ketamine administrationin an intravenous or nasal spray format.

The FDA granted Fast Track and Breakthrough Therapy designations for SPRAVATO® (esketamine) nasal spray and in March 2019 approved SPRAVATO®, in conjunction with an oral antidepressant, for treatment-resistant depression to Janssen Pharmaceuticals, Inc. SPRAVATO® requires numerous administration sessions in a certified medical office under medical supervision by a health care provider. An equity analyst predicted that SPRAVATO® could generate $3 billion in peak sales.

PharmaTher’s KETABET™ MN patch aims to empower patients to dose their medication remotely, safely and conveniently rather than being under supervision by a healthcare provider at a certified medical office. KETABET™ MN patch has the potential for enabling continuous delivery of KETABET™ (without pain) with minimal formulation manipulation into systemic circulation while maintaining constant plasma levels for more than 24 hours that will improve efficacy and compliance for patients.

Also, PharmaTher’s KETABET™ MN patch will incorporate anti-tampering and anti-abuse features because of the combined presence of ketamine and betaine and the delivery format of the product that would parallel the approach used for the tamper-resistant transdermal fentanyl patch.

PharmaTher has the exclusive worldwide license for KETABET™ which has shown in clinical research to enhance the antidepressant effect while having the potential to significantly reduce the known negative side effects of ketamine. 5 Side effects such as hallucinations, confusion, memory loss and abuse liability compromise the compliance and potential therapeutic value of ketamine.

The patented MN technology licensed by PharmaTher consists of hydrogel-forming microneedle arrays and accompanying reservoir which will overcome any limitations by the quantity of drug that can be loaded into the needles or onto the needle surfaces. As such, the MN technology can greatly increase the amount of drug that can permeate through the microneedle array and into the skin.

Professor Ryan Donnelly commented: “Our recent research with esketamine in our patented microneedle technology shows the potential of an alternative delivery method that can overcome the limitations of current ketamine delivery options without comprising the safety and compliance of patients. I am excited to work with PharmaTher in their quest to develop a next generation ketamine solution that could help the millions of people who suffer from mental health worldwide.”

Professor Ryan Donnelly is the Chair of Pharmaceutical Technology at QUB. He is a leading expert and researcher in the field of transdermal delivery with primary focus on microneedle drug delivery and its applications on improving therapeutic outcomes for patients. He has authored over 600 peer-reviewed publications, including several granted patents, 5 textbooks and approximately 250 full papers. His work has attracted numerous awards, including the Academy of Pharmaceutical Sciences Innovative Science Award in 2020, the Controlled Release Society Young Investigator Award in 2016, BBSRC Innovator of the Year in 2013, the GSK Emerging Scientist Award in 2012 and the Royal Pharmaceutical Society Science Award in 2011. He graduated with a B.Sc. degree in pharmacy (1999) and a Ph.D. in pharmaceutics (2003) from QUB.

Under the terms of the Agreement, PharmaTher gained exclusive worldwide development and commercial rights to an intellectual property portfolio consisting of granted patents in the U.S., Europe, Japan, India and China and know-how pursuant to the hydrogel-forming microneedle technology for use in the field of ketamine, esketamine, betaine and combinations thereof.

PharmaTher and QUB agreed to terms consistent with industry standards, including future payments based on clinical trial and revenue milestones.