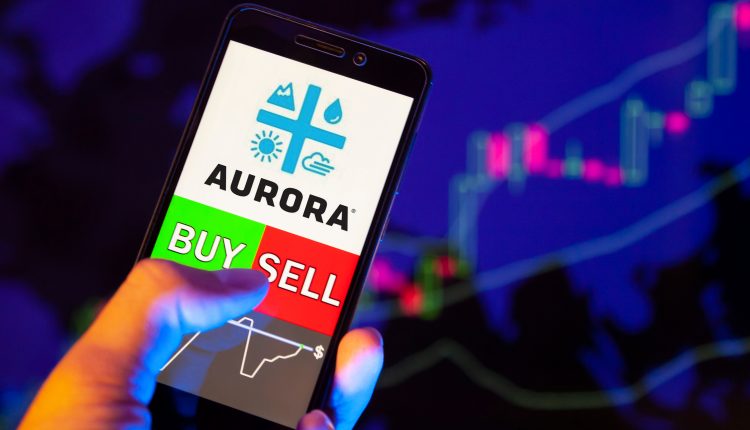 Aurora Cannabis Isn’t Worth Zero, But Long Recovery Lies Ahead

With its plunging stock price and liquidity picture in question, the survivability of Aurora Cannabis Inc (NYSE:ACB) (TSE:ACB) (FRA:21P) has increasingly come into focus. Not only has ACB stock declined ↓83.22% since April 1, 2019 alone, analysts en masse have recently thrown in the towel. Naturally, nervous investors are deciphering this perilous landscape to ascertain which action to take next. With that in mind, TDR analyzed recent events with the aim of providing insightful investing conclusions to the thousands of investors seeking such direction.

Perhaps no single event crystallizes the downright cataclysmic mood in Aurora Cannabis stock more than recent coverage rendered by GLJ Research analyst Gordon Johnson last December. In it, Johnson—ranked 4,752 out of 5,918 analysts according to TipRanks, we might add—slapped a sell rating and $0 price target, calling ACB stock effectively worthless thanks to the probability that Aurora will face an upcoming “liquidity crunch that will, ultimately, risk its status as a going concern”.

With at least three analysts calling Aurora Cannabis’ go-forward investibility into question, investors have mercilessly sold the stock. Since Gordon Johnson’s call on 16/12/19, ACB has declined ↓40.06% versus a ↑9.89% gain by close industry peer Canopy Growth. Aurora’s other closest competitor, Aphria Inc., declined only ↓21.48% during this span. Unsurprisingly, both Canopy and Aphria are not saddled with imminent liquidity concerns, with roughly $2.3B and $600M in gross cash balances, respectively.

In an environment where domestic and international cannabis sales growth has underwhelmed, cash has become king. While Aurora’s aggressive acquisition strategy allowed Aurora to hurdle past most of its competitors during good times, this bulky cannabis conglomerate wasn’t built to withstand stall-speed growth. Without the requisite cash cushion to see them through, the market is making its own corrections by aggressively re-pricing equity value.

Fortunately however, there’s reason to believe the doomsday scenario proposed by Gordon Johnson is overdone.

While Aurora Cannabis’ February 13 earnings were beyond horrific, its aftermath provided hope that stabilization (albeit at multi-year low equity value) is on the way. Subsequent rumors of a potential provincial crown corporation bailout have only crystallized such sentiment.

Before we ponder silver linings, it must be said that Aurora Cannabis’ fiscal Q2 2020 earnings were a complete disaster. Sequential quarterly revenues fell ↓23.58%—driven by a $10M charge for returns, provisions for returns and price adjustments—despite steadily increasing dry flower sales in most provincial markets. Meanwhile, selling, general & administrative (SG&A) costs increased ↑23.11% to almost $100M as operating expenses seemingly veered out of control. And the most lopsided number of all: a staggering $1.3B net loss induced by the long-anticipated writedown of impairment of goodwill and intangible assets totalling $919M. Further writedowns are likely coming in future quarters.

Although the result was largely priced-in, digesting the income statement still amounted to extreme sticker shock.

While it would be easy to take Gordon Johnson’s $0 price target call at face value following this earnings fiasco, amazingly, Aurora’s post-ER conference call provided hope that the company can somehow weather the storm.

Taking analyst questions head-on, C-Suite provided commentary on previously announced plans to drastically reduce its burn rate in the coming quarters. Along with re-jigging creditor covenants to keep the company out of technical default (announced February 6), Aurora reiterated “decisive action” to reduce SG&A expenses to a target range of between C$40-45M per quarter by the end of fiscal Q4 2020. While the projection appears aggressive in light of the just-reported $100M SG&A, CFO Glen Ibbott reminded analysts that Aurora’s SG&A was in the C$60M range not long ago and that additional costs savings could be extracted through corporate initiative prioritization.

Furthermore, Aurora exuded optimism that plunging domestic and German cannabis sales were transitory affairs. The former would be remediated by shifting production towards selling high THC products, while a resumption of German sales and inventory build would propel international revenues.

In combination with an unlocking retail picture in Ontario, where the province will issue dozens of retail licenses directly in 2020, it appears probable that Aurora’s dreadful revenue drop was, in fact, transitory.

Can the NFL Pave the Way for Marijuana Acceptance in Pro…

Even should sales U-turn and aggressive cost cutting measures are reached, Aurora Cannabis will require additional capital. With roughly $156M in cash and cash equivalent as of December 31, 2019—and roughly C$200M remaining under Aurora’s existing at-the-market (ATM) equity program—funding is needed to maintain business continuity until positive operational cash flow is achieved. After all, much of Gordon Johnson’s thesis (among others) centers around Aurora not being able to obtain bridge financing to maintain operations.

As reported by Grizzle and broken by reliable industry insider Betting Bruiser pre-earnings, rumors surfaced that Aurora Cannabis is in talks with ATB Financial to provide follow-on financing. As Crown corporations, ATB Financial and its subsidiaries operate under a legal framework established pursuant to the provisions of the ATB Act and ATB Regulation.

While TDR was unable to independently verify whether negotiations were ongoing, there’s strong evidence supporting the government bridge financing possibility.

Consider that the federal government and the four largest provinces in Canada—including Alberta— spend about $29 billion per year on business subsidies, delivered through program spending, the tax system, government business enterprises and direct investments (2014-2015). These subsidies represent almost half of the corporate income tax revenue collected by the five jurisdictions.

In particular, Alberta stands out as Canada’s most prolific subsidizer. In the 2014-15 fiscal year, per person subsidies were $640 in Alberta, about $100 ahead of the next most generous jurisdiction, Québec. Alberta has probably added to its “lead” through measures introduced in the October 2015 Fiscal Update and the 2016 budget. The kicker: ‘Capital Market Failure’ is the number one rationale for the government to provide business subsidies. We have little reason to believe these trends have much changed.

Whether helping the oil & gas industry maneuver through cyclical downturns and exploration costs; or helping subsidize Big Agriculture gain competitive advantage in the slim-margin food commodity market, Alberta is Canada’s king of subsidy intervention. Are we to believe Alberta will allow its pre-eminent licensed producer to die a quick death? We don’t think so—not with $5B dollars of latent black market money on the table, an industry leading COGS/sales position, and predictable industry growth ahead.

Secondly, ATB Financial has a history of direct intervention within the cannabis market.

For example, on September 6th 2018, it was announced that Invictus MD Strategies Corp. closed a $25.5 million debt financing arrangement with ATB Financial to accelerate the construction of its Phase 3 and Phase 4 cannabis cultivation facilities in west-central Alberta. While that gambit hasn’t exactly worked out, Invictus was never more than a Tier-3 LP in the Canadian marketplace. We find it inordinately hard to believe that Aurora will be shut out considering it is an infinitely more advanced and strategic operator within the province.

Currently, the Edmonton-based company employs approximately 2,300 people and is a key player in both domestic and international markets.

While we are not calling a bottom in ACB stock (more ATM dilution is imminent and price-to-book value is presently $0.64 USD, for example), we believe Aurora will procure the financing it needs to continue executing its business strategy for several quarters out. After all, the first step towards rebuilding tattered investor confidence is discounting the possibility that Gordon Johnson’s thesis will play out. Only after investors become confident that ‘going concern’ status is not threatened can the stock form a solid foundation.

Although hyperbolic to surmise that Aurora Cannabis is too big to fail, it will be a devastating look to all levels of government if it is left to dissolve. Canada’s perception as a sector leader depends on it. In combination with newly announced cost-control measures, better product mixes, international expansion (as glacial as it may seem), Cannabis 2.0 and the Ontario retail market, staking new capital doesn’t seem as hopeless as the charts suggests. But any recovery will be arduous, uneven and require a leap of company faith in execution which is sorely lacking presently. There will be no V-bottom.

Everything depends on future financing procurement in an environment where banks aren’t lending. Will ATB Financial provide that backstop? Nobody knows for sure. But the smart bet is that some form of public financing will occur in lieu. Alberta has an extensive history of backstopping companies with much less.

Can the NFL Pave the Way for Marijuana Acceptance in Pro Sports?

Can the NFL Pave the Way for Marijuana Acceptance in Pro…