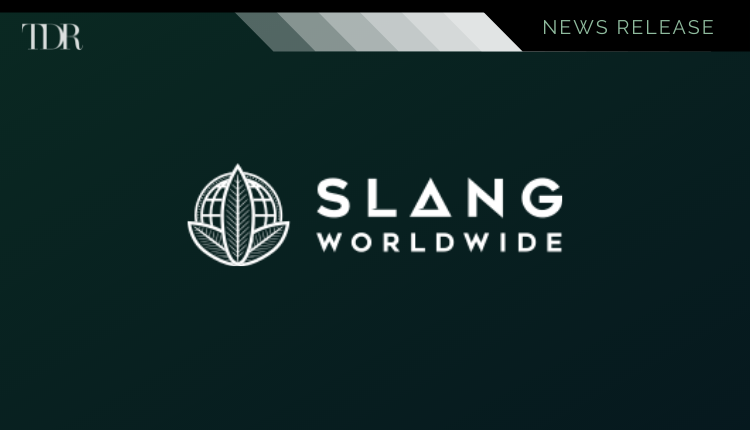 $17.3 Million USD Financing Plus $14.2 Million USD in an Uncommitted Accordion to Enable Growth Strategy by Accelerating Execution of Vermont Operations

SLANG Worldwide Inc. (CNSX: SLNG) (OTCMKTS: SLGWF), a leading global cannabis consumer packaged goods (CPG) company with a diversified portfolio of popular brands, today announced a term-loan financing (the “Loan Transaction“) with Trulieve Cannabis Corp. (CSE: TRUL) (OTCQX: TCNNF) (“Trulieve“), a leading and top-performing cannabis company based in the United States, and two existing significant shareholders of the Company, Pura Vida Investments (“Pura Vida“) and Seventh Avenue Investments (“Seventh Avenue“), for aggregate proceeds of $17.3 million USD. At least 50% of the loan proceeds will be allocated to the development of operations in Vermont to achieve long-term profitability and further execute strategic growth objectives. In addition, the Company’s board of directors (the “Board“) has appointed Drew McManigle as interim Chief Executive Officer and Chairman of the Board, effective November 15th. Mr. McManigle succeeds Chris Driessen as Chief Executive Officer, upon his departure from the Company. Mr. McManigle also succeeds Peter Miller as Chairman of the Board and Mr. Miller remains a director of the Company.

Drew McManigle’s appointment as interim CEO and Chairman provides SLANG with proven leadership with experience across a variety of industries to strengthen SLANG’s position as a specialty focused, nimble, pragmatic organization. This leadership transition, integrated with the overall strategic transformation, positions the Company to successfully capitalize and build upon its platforms in Colorado and Vermont to drive profitable growth, while taking a carefully crafted and prudent approach to evaluating and capturing additional future growth opportunities.

“Our investment in SLANG underscores the success of our strategic partnership, as well as our commitment to providing the trusted and reliable brands our customers rely on,” said Kim Rivers, CEO of Trulieve. “Since beginning our exclusive partnership in Florida, we have been able to bring SLANG to additional markets, expanded into wholesale, and now look forward to continued growth at scale and mutual success as we strive to provide our customers with the highest-quality products and unparalleled experience they can expect at Trulieve.”

I’m excited about the opportunity to lead SLANG and further develop its established operating platform in the cannabis industry. My focus is on assuring SLANG is both operating efficiently and profitably capitalizing on new growth opportunities. Our top priority is the evolution of SLANG and its strategic positioning. The concurrent financing round represents a vote of confidence from a leading industry partner, Trulieve, and two of our largest shareholders, Pura Vida and Seventh Avenue.

Mr. McManigle is the Founder and Chief Executive Officer of MACCO Restructuring Group, LLC (“MACCO“). He brings both wide-ranging experience, derived from a variety of industries, as well as a solutions-driven leadership style that has led to successful outcomes in numerous complex situations. As interim CEO and Chairman, Mr. McManigle will have oversight over key strategic, operational and financial functions. In addition to existing SLANG management, Mr. McManigle will also have the added support of members of MACCO who will provide senior level operating and financial expertise to enable rapid strategic reviews and business plan implementation.

While at MACCO, Drew has held several leadership and fiduciary roles, including interim CEO and CRO. He has also served as an independent director. Prior to MACCO, Mr. McManigle was a principal of his own firm for 22 years. He had previously been employed by a Fortune 500 healthcare services company and had established the Houston office for a California-based advisory firm. He attended Texas Tech University and received his bachelor’s degree from the University of Houston.

The Company further announces that it has accepted the resignation of each of Chris Donnelly, Chris Driessen, Kelly Ehler, Keith Stein and Robert Verdun from the Board, effective immediately. The Company acknowledges each of the departing members of the Board for their support and contributions to the Company.

To support the leadership transition, the Company has entered into an agreement with Mr. Driessen to provide transitional services to the Company in exchange for certain cash payments and the issuance of 600,480 Common Shares on the date hereof, as well as future share-based payments.

Under the terms and conditions of the Loan Transaction, Trulieve, Pura Vida, Seventh Avenue, and other investors (collectively, the “Lenders“) will provide SLANG a loan of $17.3 million USD (the “Initial Loan Amount“), which is subject to an original issue discount of 3% and will have a three-year term and a PIK interest rate of 9.75%, compounded quarterly, with the entire outstanding balance, including interest, becoming due and payable on third anniversary of the Loan Transaction (the “Maturity Date“). Additionally, SLANG will pay the Lenders an aggregate total amount equal to $3.6 million USD (together with the Initial Loan Amount, the “Loan Amount“) on the earlier of: (i) the Maturity Date; and (ii) any date of prepayment of the Initial Loan Amount. In addition, the Company has granted the Lenders an option to, at any time on or prior to the Maturity Date, convert any portion of the Loan Amount, including the earned interest thereon, into common shares of the Company (“Common Shares“) at a price per Common Share equal to $0.1273 USD. The Loan Amount is secured by a first secured ranking on the assets of SLANG, guaranteed on a senior secured basis by certain of SLANG’s subsidiaries. The proceeds of the Loan Transaction will be used for both working capital and to fund the development of SLANG’s Vermont operations.

In addition, the Company has decided to reduce its Oregon operations and will consolidate production to its Colorado facility. Therefore, in the near term, the Company is pivoting its strategic agenda and focusing on its core markets of Colorado and Vermont. Mr. McManigle will lead the Company to success by leveraging SLANG’s core platform to drive near term profitability and tactfully guide the Company’s long-term strategy in connection with his appointment.

To be added to SLANG’s email distribution list, please email [email protected] with “SLNG” in the subject.

The participation of Seventh Avenue and Pura Vida in the Loan Transaction constitutes a “related party transaction” within the meaning of Multilateral Instrument 61-101 – Protection of Minority Security Holders in Special Transactions (“MI 61-101“). The Company has relied on exemptions from the formal valuation and minority shareholder approval requirements of MI 61-101 contained in sections 5.5(a) and 5.7(1)(a) of MI 61-101 in respect of related party participation in the Loan Transaction as neither the fair market value (as determined under MI 61-101) of the subject matter of, nor the fair market value of the consideration for, the Loan Transaction, insofar as it involved the related parties (being Seventh Avenue and Pura Vida), exceeded 25% of the Company’s market capitalization (as determined under MI 61-101). Further details will be included in a material change report to be filed by the Company. The material change report will not be filed more than 21 days prior to closing of the Loan Transaction due to the timing of the announcement of the Loan Transaction and the anticipated closing thereof occurring in less than 21 days.