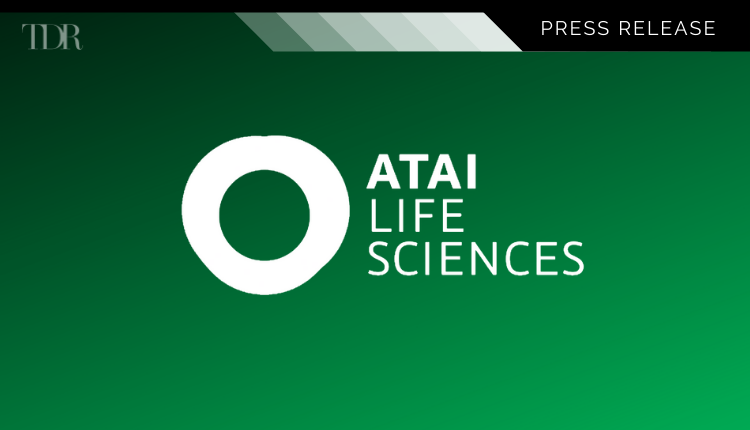 -Advancement of 11 therapeutic programs, including initiation of Recognify’s Phase 2 and GABA’s Phase 1 trials-

-Solidified leadership position with strong cash position of $453.6 million to advance our current programs and incubate, acquire and invest in new programs-

-Company to host a webcast and conference call today at 08:30am EDT-

In the second quarter of 2021, we made significant advancements to build our business and successfully completed an initial public offering on Nasdaq, raising approximately US$258.8 million in gross proceeds. We have the financial resources to maximize the value of our decentralized drug development platform for improved probability of clinical success and leverage the value of our transformative pipeline. 2021 continues to be a pivotal year for atai with multiple upcoming catalysts across our expanding pipeline.

Perception Neuroscience:
Program Details: PCN-101 is a parenteral formulation of R-ketamine, a glutamatergic modulator being developed as a rapid-acting antidepressant, with the potential to be an at-home non-dissociative alternative to S-ketamine (marketed as SPRAVATO).

Upcoming Milestones: Topline results from the Phase 2a single-arm, multiple dose trial in patients with CIAS expected in late 2021.

Program Details: DMX-1002 is an oral formulation of ibogaine, a cholinergic, glutamatergic and monoaminergic receptor modulator being developed for the treatment of opioid use disorder.

Program Details: COMP360 is a proprietary formulation of synthetic psilocybin, a 5-HT2A-R agonist being developed as an oral, rapid-acting antidepressant.

Upcoming Milestones: Phase 2b trial results are expected in late 2021.

Cash and Cash Equivalents
Cash and cash equivalents totaled $453.6 million as of June 30, 2021, compared to $97.2 million as of December 31, 2020. The six month increase of $356.4 million is attributed to net proceeds of $231.6 million from our Initial Public Offering, net proceeds of $168.6 million from Series C and Series D common stock issuances, $20.0 million of license revenue proceeds, and $4.0 million proceeds from the sale of investments and conversion of convertible notes. Offsetting were cash payments of $32.0 million for investments in platform companies, and $35.8 million in net operating expenses.

Revenues
License revenue in the first half 2021 of $19.9 million was related to proceeds received from Perception’s License and Collaboration Agreement with Otsuka.

Operating Costs and Expenses
Research and development expenses were $16.0 million and $21.6 million for the three and six months ended June 30, 2021, as compared to $2.9 million and $5.0 million for the same prior year periods. The increase of $13.1 million and $16.6 million, respectively, were attributable to personnel costs, including stock-based compensation expense, and increased CRO expenses related to advancements in our R&D programs.

We recorded acquisition of in-process research and development expense of $8.0 million and $9.0 million for the three and six months ended June 30, 2021, relating to our investments in Neuronasal and InnarisBio.

General and administrative expenses for the three and six months ended June 30, 2021 were $37.3 million and $46.6 million, as compared to $2.9 million and $4.4 million in the same prior year periods. The increases of $34.4 million and $42.2 million, respectively, were attributable to personnel costs, including stock-based compensation expense, professional fees, and other costs related to support of our platform growth and public company requirements.

Total stock-based compensation expense for the three and six months ended June 30, 2021 was $37.5 million and $37.7 million, respectively, as compared to $41,000 and $82,000 for the comparable prior year periods, reflecting the recognition of expense related to the achievement of IPO performance-based partial vesting conditions.

Net loss attributable to atai stockholders for the three and six months ended June 30, 2021 was $48.5 million and $47.8 million, respectively, as compared to $16.4 million and $0.1 million for the comparable prior year periods.