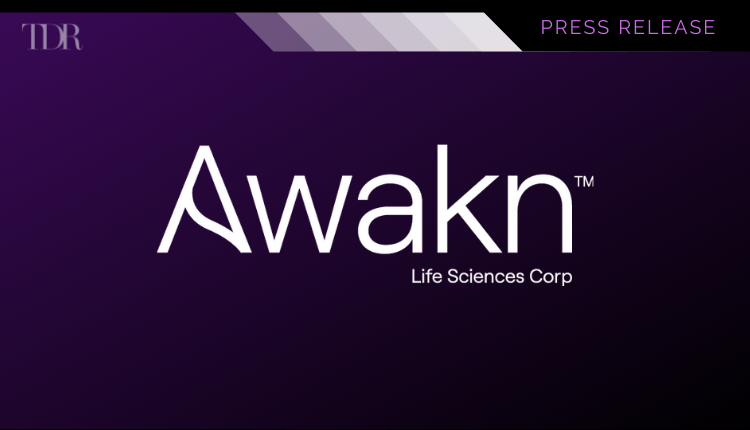 Awakn Life Sciences Corp. (NEO: AWKN) (OTCMKTS: AWKNF), a biotechnology company developing and delivering psychedelic therapeutics (medicines and therapies) to treat Addiction, announced today it has signed a Memorandum of Understanding (“MOU”) with the Multidisciplinary Association for Psychedelic Studies (MAPS) to explore a partnership to utilize MDMA-assisted therapy to treat Alcohol Use Disorder (AUD) in Europe.

Under the terms of this MOU, Awakn will explore a data licensing agreement with MAPS to support Awakn’s Phase IIb and planned Phase III studies for MDMA-assisted therapy for AUD in Europe. Awakn and MAPS will also assess a partnership to secure marketing authorisation/regulatory approval for the ethical commercialization of MDMA-assisted therapy for the treatment of AUD in Europe.

AUD is a chronic disease affecting 40 million people in Europe and 390 million people globally. It is also a pervasive and persistent public health issue, with alcohol use being one of the top five causes of disease and disability in the majority of countries in Europe. And for each person suffering from AUD, there is a friend, a partner, or a family also deeply affected by it.

In February 2021, Awakn announced the publication of the successful results of the BIMA Phase IIa study investigating MDMA-assisted therapy for the treatment of AUD, reporting a 21% relapse rate at 9 months in comparison to a 75% relapse rate in a separate observational group.

In May 2021, MAPS announced that it achieved successful results in its first of two Phase III trials for MDMA-assisted therapy for the treatment of severe chronic PTSD. In this study, 88% of participants who received three MDMA-assisted therapy sessions – along with twelve 90-minute, non-drug preparation and integration therapy sessions – experienced a clinically meaningful reduction in symptoms. 67% of participants no longer qualified for a PTSD diagnosis.

MAPS’ role in driving and advancing the use of psychedelics in the clinical setting over the last 35 years is second to none. We believe that by licensing MAPS’ pre-clinical data and exploring options for future ethical commercialisation, we will improve the timeline and path to market for these life-changing treatments for AUD, providing hope for those for whom the status quo is not working.

“MAPS has been working with AWAKN scientists for decades in the effort to initiate trials into a range of clinical uses of MDMA-assisted therapy,” shares Rick Doblin, Founder and Executive Director of MAPS. “We’re delighted to be entering into this MoU with AWAKN which holds great promise for people suffering from AUD.”

Awakn also recently announced groundbreaking results from its Phase IIa/b ‘Ketamine for the Reduction of Alcoholic Relapse’ (KARE) clinical trial. It was the first controlled study in the world to investigate Ketamine-assisted therapy for the treatment of AUD and was published in the American Journal of Psychiatry in January. The study, conducted by the University of Exeter (UoE) and led by Prof. Celia Morgan, Professor of Psychopharmacology at UoE and Awakn’s Head of Ketamine-Assisted Therapy for addiction showed that ketamine and psychological therapy resulted in an 86% abstinence rate 6 months post treatment, an increase from 2% before the trial.

“This is another milestone in the advancement of successfully treating Alcohol Use Disorder,” said Awakn CMO Dr. Ben Sessa. “Currently there are millions suffering with very few promising lasting treatments and be it with MDMA or Ketamine-Assisted Therapy, we are exploring every promising avenue to treat a disease that not only impacts the individual, but also families and communities.”

The safety and efficacy of MDMA-assisted therapy is currently under investigation. It has not yet been approved by medical regulators, does not work for everyone, and carries risks even in therapeutic settings. These statements are no guarantee of future regulatory approval or availability of MDMA-assisted therapy. These statements necessarily involve known and unknown risks and uncertainties, which may cause actual outcomes to differ materially from our projections.