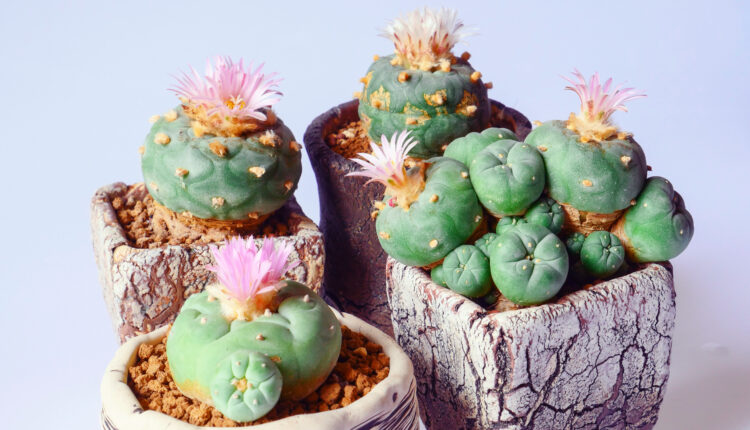 Mescaline: A Brief History Of The First Psychedelic

While today, scientists aren’t as interested in the psychedelic compound mescaline as they once were, this cactus-derived hallucinogenic—also known as 3,4,5-trimethoxyphenethylamine—has a unique history, one that ought not to be overlooked in the craze over new compounds.

Where It Comes From

While the classic psychedelics psilocybin, DMT, and LSD are variations of an alkaloid called tryptamine, mescaline is a variation of phenethylamine. Like the others, it interacts with serotonin receptors, as a partial agonist of the 5-HT2A and 5-HT2B receptors and a full agonist of the 5-HT2C receptor. It is also thought to stimulate dopamine receptors.

The chemical structure of mescaline resembles that of amphetamine. A mescaline trip can last between 9 to 12 hours or longer, depending on the dose. This might be why it’s not popular among scientists today.

Historically, mescaline-containing cacti like peyote and San Pedro (also referred to as huachuma) have been used by several different Indigenous tribes throughout South America, Mexico, Northern Texas, and other parts of the United States in ritual ceremonial use and are still used today by groups including the Native American Church. Archeological discoveries suggest that these cacti have been used by humans for more than 5,000 years.

The first time a psychedelic compound was described in a scientific journal was in 1887, when Dr. John Raleigh Briggs wrote about his experience after eating peyote[1], a short, stout cactus native to the deserts of southern Texas and northern Mexico.

Ten years later, the German pharmacologist and physicist Arthur Heffter isolated the compound mescaline from the cactus and determined that it was responsible for the cactus’ psychoactive properties.

According to Briggs, after eating a peyote button, his heart began to race, and he had trouble breathing. Pharmaceutical companies like Parke-Davis, who were eagerly searching for an alternative to cocaine, would take note and saw mescaline as a potential alternative. In 1893, the company would offer a mescaline-containing tincture sold as a ‘cardiac tonic,’ though it wouldn’t have the same appeal as cocaine and didn’t take off among consumers.[2]

A common finding among early scientists that studied mescaline was that its effects were incredibly variable from one subject to the next. While Briggs wrote that it made him feel panicked, Heffter, who dosed himself with mescaline, said the compound promoted “wonderful colour apparitions” and “a loss of the sense of time.”

Pharmaceutical companies weren’t the only ones interested in mescaline: both the German and U.S. militaries tested mescaline and LSD on prisoners and agents as so-called ‘truth drugs.’

Opening The Doors of Perception

The drug would continue to be tested on humans into the 1950s and 1960s, and it wouldn’t make a splash on the scene until 1954, when Aldous Huxley’s seminal book, The Doors of Perception was published. In it, the author described his firsthand experience with mescaline after being dosed by Dr. Humphry Osmond, the man who coined the term ‘psychedelic.’

Huxley hypothesized that the drug could help doctors solve the problem of the chemical imbalance that was thought to be the cause of schizophrenia. This theory proved to be incorrect, and soon, another drug would steal away the spotlight, one that required an exponentially smaller dose: LSD. By 1962, most researchers had abandoned their work with mescaline for LSD-25.