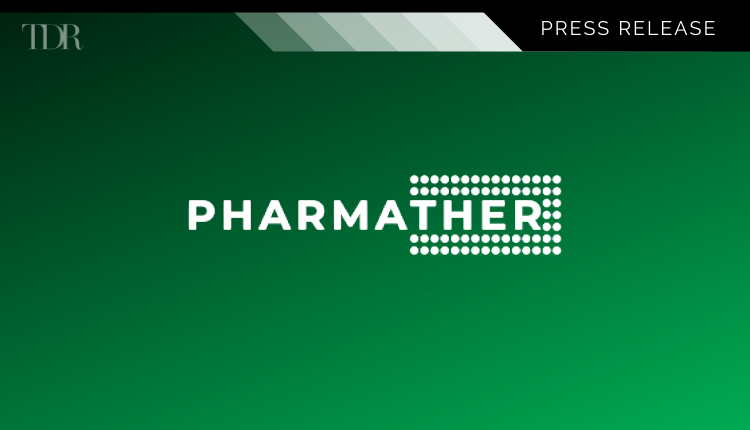 PharmaTher Holdings Ltd.(CNSX: PHRM) (OTCMKTS: PHRRF), a clinical-stage psychedelics biotech company, is pleased to announce that it has filed a pre-Investigational New Drug (“pre-IND”) meeting request and complete pre-IND briefing package with the U.S. Food and Drug Administration (“FDA”) to support the clinical development of KETABET™ and the proposed Phase 2 clinical study as a potential next-generation treatment for depression, and to discuss the product development plan for the Company’s patented hydrogel-forming microneedle patch delivery technology.

KETABET™ has the potential to receive FDA approval under the 505(b)(2) regulatory pathway and Fast Track designation by the FDA for treatment in patients with major depressive disorder.  The hydrogel-forming microneedle patch offers a novel way to deliver ketamine and other psychedelics such as psilocybin, DMT, MDMA and LSD, and has the potential to improve on the safety (i.e. fewer side effects), efficacy (i.e. bioavailability, optimized dosing regimen including continuous system delivery) and compliance (i.e. storage, distribution and self-administration) of these psychedelics that currently must be taken orally, inhaled, injected and intravenously.

We have an insatiable focus on developing and commercializing novel uses, formulations and delivery forms of ketamine.  We are committed to solving the ketamine puzzle and unlocking its true potential to treat depression by leveraging our robust intellectual property portfolio, clinical and regulatory experience, and our recently approved IND by the FDA to evaluate ketamine to treat Parkinson’s disease in a Phase 2 study.  We are now in a position to lead the way in reviving ketamine and KETABET™ as a potential FDA-approved prescription-based therapy for mental health, neurological and pain disorders.

The Company has assembled a prolific scientific and clinical team experienced in depression, including Dr. Maurizio Fava, MD, Psychiatrist-in-Chief of the Massachusetts General Hospital and Professor Matthew Macaluso, D.O., Clinical Director of the University of Alabama at Birmingham Depression and Suicide Center.

KETABET™, a patented combination formulation of FDA-approved ketamine and betaine anhydrous, has been shown in research to enhance the antidepressant effect while having the potential to reduce the known negative side effects of ketamine significantly.1 Side effects such as hallucinations, confusion, memory loss and abuse liability compromise the compliance and potential therapeutic value of ketamine.2  The combination of ketamine and betaine anhydrous produced more robust antidepressant-like responses than their individual effects and that the combination blocked the psychotomimetic effects of ketamine.1  This suggests that betaine anhydrous can be considered as an add-on therapy to ketamine or as a fixed-dose combination therapy for treatment-resistant depression, treatment-resistant bipolar disorder, post-traumatic stress disorder, obsessive-compulsive disorder and chronic pain.

More than 300 million people suffer from major depressive disorder and 100 million people are resistant to available treatments worldwide.  Ketamine is emerging as a viable treatment option for depression. Recent clinical studies have shown that low dose ketamine produces a rapid-acting and sustained antidepressant effect in major depressive disorder,3 bipolar depression,4 depression with suicidal ideation5 and post-traumatic stress disorder.6  Despite this, the potential for abuse and misuse of ketamine and the adverse mental effects of ketamine leads to its limited clinical use and discontinuation.

Betaine anhydrous (CYSTADANE®) was approved by the FDA in 1996 to treat homocystinuria to decrease elevated homocysteine blood concentrations.  There is growing evidence that betaine plays a critical role in regulating brain functions and has an antidepressant-like effect.7  Betaine has been reported to prevent seizures in rodents,8 to improve symptoms of Rett syndrome,9 and to delay the onset of neurologic impairment due to vitamin B12 deficiency10 clinically.  Furthermore, betaine attenuates memory deficits induced by homocysteine.11

The Potential of the Hydrogel-forming Microneedle Patch

The pre-IND briefing package includes a discussion of the product development plan for the patented hydrogel-forming microneedle (“MN”) patch to deliver ketamine and KETABET™ for intradermal administration to treat various mental health, neurological and pain disorders.  The MN patch consists of hydrogel-forming microneedle arrays and an accompanying reservoir that will overcome limitations by the quantity of drug loaded into the needles or onto the needle surfaces. As such, the MN patch can significantly increase the amount of drug that can permeate through the microneedle array and into the skin.12  The MN patch is specifically tailored for ketamine and KETABET™ due to the volume of drug that is required to maximize their therapeutic utility and increase potential market opportunities.

The Company’s proposed MN patch was successfully validated in a proof-of-concept study in delivering esketamine, the S(+) enantiomer of ketamine, which may overcome the drawbacks of ketamine administration in an intravenous or nasal spray format.  Results of this study can be found in a published paper titled “Hydrogel-forming microneedle arrays as a therapeutic option for transdermal esketamine delivery”.13

The KETABET™ MN patch aims to empower patients to dose their medication remotely, safely and conveniently rather than being supervised by a healthcare provider at a certified medical office.  KETABET™ MN patch has the potential for enabling continuous delivery of KETABET™ (without pain) with minimal formulation manipulation into systemic circulation while maintaining constant plasma levels for more than 24 hours that will improve efficacy and compliance for patients.12-13  Also, PharmaTher’s KETABET™ MN patch will incorporate anti-tampering and anti-abuse features that parallel the approach used by commercially available tamper-resistant transdermal fentanyl patches.

Ketamine was approved by the FDA in 1970 and is clinically used for analgesia, sedation, and anesthetic induction.  The FDA granted Fast Track and Breakthrough Therapy designations for SPRAVATO® (esketamine) nasal spray and in March 2019 approved SPRAVATO®, in conjunction with an oral antidepressant, for treatment-resistant depression to Janssen Pharmaceuticals, Inc.  SPRAVATO® requires numerous administration sessions in a certified medical office under medical supervision by a health care provider.14  An equity analyst predicted that SPRAVATO® could generate $3 billion in peak sales.15