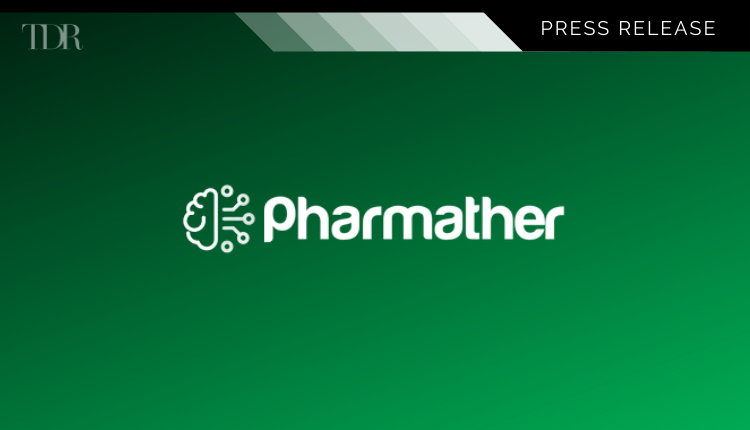 PharmaTher Holdings Ltd. (CNSX: PHRM) (OTCMKTS: PHRRF), a specialty psychedelic pharmaceutical company, is pleased to provide an update on its psychedelic product programs as it relates to the clinical and commercial development of ketamine and the research and development of proprietary microneedle patch delivery systems for psychedelics such as ketamine, psilocybin, N,N-Dimethyltryptamine (“DMT”), 3,4-Methyl​enedioxy​methamphetamine (“MDMA”) and lysergic acid diethylamide (“LSD”).

Over the last 12 months, we have been focused on building our intellectual property portfolio, which currently consists of 17 granted patent and patent applications, advancing the clinical development of our ketamine product pipeline targeting Parkinson’s disease, depression and Lou Gehrig’s disease, and developing novel microneedle patch delivery systems to unlock the clinical value of psychedelics to treat neuropsychiatric, neurodegenerative and pain disorders. With the recent closing of the sale of our psilocybin program to Revive Therapeutics for up to CAD $10 million, of which we received $3 million in cash and $4 million in Revive common stock upfront, we are in a good financial position to advance our FDA Phase 2 clinical studies with ketamine and to finalize the development of our proprietary microneedle patch delivery systems for clinical trials and to partner with life sciences companies seeking a differentiated, safe and effective delivery option for psychedelics.

PharmaTher is planning on developing its own branded ketamine and is advancing the clinical development of ketamine for Parkinson’s disease, depression and Amyotrophic lateral sclerosis (“ALS”), also known as Lou Gehrig’s disease under the FDA 505(b)(2) regulatory pathway. The 505(b)(2) regulatory pathway provides for FDA approval based on data (i.e., preclinical and clinical data) previously reviewed by the FDA for the approval of a separate drug application. PharmaTher seeks to leverage this regulatory pathway to potentially accelerate the development and lower the clinical and regulatory risk of its ketamine-focused product pipeline. The Company plans to have investigational new drug (“IND”) applications with the FDA this year to evaluate ketamine in Phase 2 clinical trials for Parkinson’s disease, depression, and ALS.

PharmaTher plans to commercialize its own branded ketamine product to support its growing ketamine-based product pipeline and meet the increasing demand for ketamine globally. The Company is in discussions with contract development and manufacturing organizations (“CDMOs”) for the development and commercialization of ketamine and to file an Abbreviated New Drug Application (“ANDA”) to obtain FDA approval to market ketamine in the U.S. An ANDA is a request to the FDA to manufacture and market a generic drug in the U.S. The Company will provide details on its commercialization strategy once a CDMO is chosen.

PharmaTher entered into an exclusive license agreement with the University of Arizona to develop and commercialize ketamine to treat Parkinson’s disease and movement disorders. Study results from preclinical studies and case studies in Parkinson’s disease patients from the University of Arizona have shown that low-dose sub-anesthetic ketamine infusion indicates tolerability, safety, and potential long-term therapeutic benefit to reduce levodopa-induced dyskinesia, improve on time, and reduce depression.

PharmaTher will file its IND application with the FDA this month to evaluate the safety, efficacy and pharmacokinetics of a low dose of ketamine for the treatment of levodopa-induced dyskinesia (“LID”) in individuals with Parkinson disease (“PD”) in a Phase 2 clinical trial. Assuming the Phase 2 clinical trial is positive, the Company will request a meeting with the FDA to discuss its plan and to obtain an agreement to move to a pivotal Phase 3 clinical study under the 505(b)(2) regulatory pathway.

Over 300 million people suffer from major depressive disorder, and 100 million people are resistant to available treatments worldwide. Ketamine is emerging as a viable treatment option for depression. Despite this, the potential for abuse and misuse of ketamine and the adverse mental effects of ketamine uses such as dissociative, hallucinogenic, and amnesic effects leads to its limited clinical use and discontinuation.

PharmaTher entered into an exclusive worldwide license agreement with the National Health Research Institutes to develop and commercialize a patented combination formulation of FDA-approved ketamine and betaine (“KETABET™”) as a potential next-generation ketamine product. KETABET™ has shown in research studies to enhance the antidepressant effect while having the potential to significantly reduce the known negative side effects of ketamine.

In Q2-2021, PharmaTher plans to file a pre-Investigational New Drug (“pre-IND”) meeting request with the FDA to support the clinical development of KETABET™ in depression. The pre-IND meeting will provide valuable information for the Company to conduct a Phase 2 clinical study in the U.S. and obtain agreement that a 505(b)(2) regulatory pathway is acceptable, allowing for the potential to accelerate the clinical development for KETABET™ approval. After the pre-IND meeting, PharmaTher will file an IND application to conduct a Phase 2 clinical study.

Currently, there is no known cure for Amyotrophic lateral sclerosis (“ALS”). ALS is a progressive neuromuscular disease with a life expectancy of only 2 to 6 years after diagnosis. ALS affects approximately 50,000 people in the U.S. and Europe, with over 5,000 new cases diagnosed annually. As ALS advances, upper and lower motor neurons die, causing the brain to lose its ability to control muscle movement. Peak sales for a new drug to treat ALS can achieve over USD $1 billion.

PharmaTher entered into an exclusive license agreement with The University of Kansas to develop and commercialize the intellectual property of ketamine to treat ALS. Inventors Dr. Richard J. Barohn, M.D., John A. Stanford, Ph.D., and Dr. Matthew Macaluso, D.O., have made the promising discovery that ketamine can be administered as an effective treatment for ALS. Their preclinical research has shown that the administration of ketamine preserves muscle function in advancing ALS and increases life expectancy when given in the early stages of muscle decline.

PharmaTher is in discussions with CDMOs to manufacture clinical-grade microneedle patches to evaluate the delivery of psychedelic drugs, such as ketamine, psilocybin, DMT, MDMA and LSD in human clinical trials.

PharmaTher entered into an exclusive worldwide patent and know-how license agreement with The Queen’s University of Belfast (“QUB”) to develop and commercialize a patented hydrogel-forming microneedle patch delivery technology developed by Professor Ryan Donnelly to support PharmaTher’s product and clinical development initiatives involving ketamine. The patented microneedle (“MN”) patch delivery system consists of hydrogel-forming MN arrays and an accompanying reservoir which will overcome any limitations by the quantity of drug that can be loaded into the needles or onto the needle surfaces. The MN patch can significantly increase drug permeating through the microneedle array and into the skin. This MN patch is ideal for KETABET™ due to drug loading capacity and combination.

Most recently, Professor Donnelly’s lab successfully completed research and published a paper titled “Hydrogel-forming microneedle arrays as a therapeutic option for transdermal esketamine delivery,” validating the delivery of esketamine, the S(+) enantiomer of ketamine, in a novel microneedle patch which may overcome the drawbacks associated with ketamine administration in an intravenous or nasal spray format.

PharmaTher will continue developing the hydrogel-forming MN patch and evaluate it with KETABET™. PharmaTher’s proposed KETABET™ MN patch aims to empower patients to dose their medication remotely, safely and conveniently rather than under supervision by a healthcare provider at a certified medical office. KETABET™ MN patch has the potential for enabling continuous delivery of KETABET™ (without pain) with minimal formulation manipulation into systemic circulation while maintaining constant plasma levels for more than 24 hours that will improve efficacy and compliance for patients. Also, the KETABET™ MN patch will incorporate anti-tampering and anti-abuse features and the product’s delivery format that would parallel the approach used for the tamper-resistant transdermal fentanyl patch.

Development of the ketamine hydrogel-forming MN delivery system at QUB is ongoing, and development milestones will be made available as they arise.

The Company entered into an exclusive license agreement for the development and commercialization of a proprietary microneedle delivery system, comprised of a biocompatible and biodegradable gelatin methacryloy (“GelMA”) composite developed in Khademhosseini Lab at the University of California, Los Angeles (“UCLA”), for use with psychedelic pharmaceuticals, including, but not limited to, psilocybin, LSD, MDMA, DMT, ibogaine and cannabinoids.

PharmaTher entered into a sponsored research agreement with the Terasaki Institute to further develop the GelMA MN patch for microdosing of psychedelics. The results of certain development milestones will be made available as they arise.