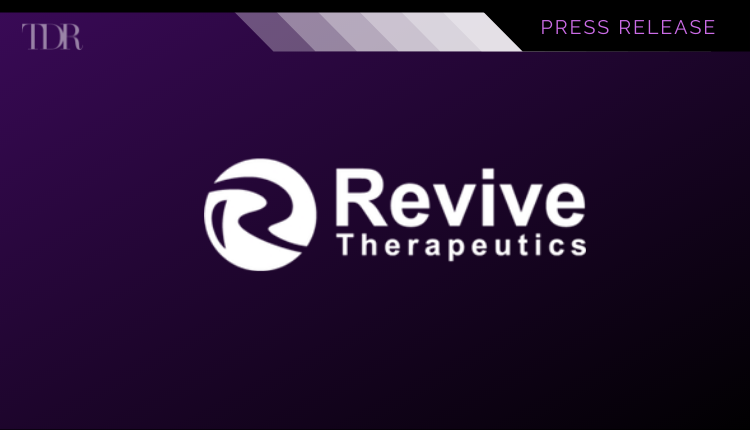 Company intends to move its head office to the US to better support growing drug programs with Bucillamine, Cannabidiol, and Psilocybin

Revive Therapeutics Ltd.(CNSX: RVV, OTCMKTS: RVVTF), a specialty life sciences company focused on the research and development of therapeutics for medical needs and rare disorders, today announced that in light of the growing cases of acute hepatitis in children reported by the World Health Organization (“WHO”), the Company will advance its drug pipeline for inflammatory liver disorders including Bucillamine in the prevention of ischemia-reperfusion injury during liver transplantation and Cannabidiol for autoimmune hepatitis.

As of May 26, 2022, six hundred and fifty probable cases of acute hepatitis of unknown aetiology in children have been reported to WHO from 33 countries in five WHO Regions between 5 April and 26 May 2022. The aetiology of this severe acute hepatitis remains unknown and under investigation; as the cases are more clinically severe and a higher proportion develops acute liver failure than previous reports of acute hepatitis of unknown aetiology in children. At least 38 children have required a liver transplant, nine have died, and 99 cases pending classification, according to a statement from WHO (https://www.who.int/emergencies/disease-outbreak-news/item/DON-389).

The Company has a diverse product pipeline in development for rare inflammatory liver disorders, including receiving FDA orphan drug designation for Bucillamine to prevent ischemia-reperfusion injury during liver transplantation and Cannabidiol for autoimmune hepatitis. Revive has entered into a clinical trial agreement with The Trustees of Indiana University (“TIU ”) to develop and manage a proposed Phase 2 clinical study using Cannabidiol as an adjunct therapy for difficult to treat autoimmune hepatitis.

Revive will also explore the use of Bucillamine for liver transplantation with clinical investigators on the protocol design and regulatory pathway to obtain FDA acceptance to proceed with a clinical study under an investigational new drug application. The Company believes the use of Bucillamine during liver transplantation has the potential to be a safe and effective approach to address the unmet medical need for a novel strategy to limit or prevent ischemia-reperfusion injury. Bucillamine, a cysteine derivative that contains two donatable thiol groups, in the context of ischemia-reperfusion injury is capable of replenishing the thiol group in glutathione, thereby reactivating this endogenous defense against oxidant injury. Bucillamine also has the potential to improve graft function and patient outcome by preventing or lessening IRI.

In addition, the Company intends to move its head office to the US to better access and support growing drug programs with Bucillamine and other products.