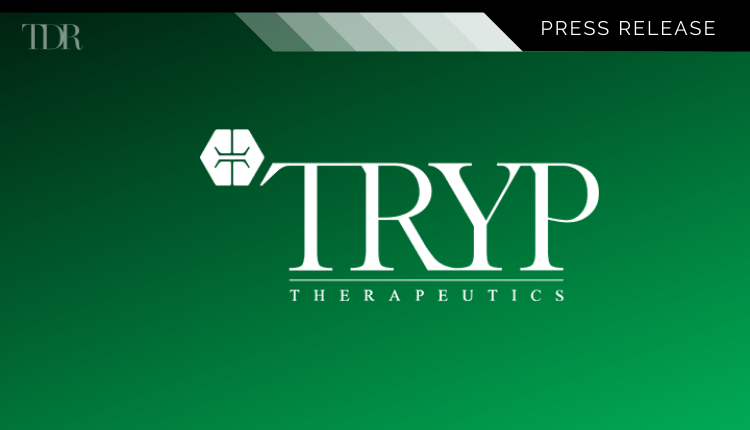 Tryp Therapeutics Inc. (CNSX: TRYP) (OTCMKTS: TRYPF), today announced its interim financial results for the three and six month periods ended February 28, 2021. Complete financial statements along with related management discussion and analysis can be found in the System for Electronic Document Analysis and Retrieval, the electronic filing system for the disclosure documents of issuers across Canada at www.SEDAR.com.

The reported period included the completion of Tryp’s Initial Public Offering; significant additions to the Company’s executive team and Scientific Advisory Board; advancements with Tryp’s manufacturing program for synthetic psilocybin; and the announcement of a collaboration with the University of Florida on clinical trial activities for eating disorders.

Tryp added three leading experts to its Scientific Advisory Board during the reported period including Robin Carhart-Harris, Ph.D. (Imperial College of London), Joel Castellanos, M.D. (UC San Diego), and William Schmidt, Ph.D. The Company also recently appointed Greg McKee as Chairman and Chief Executive Officer and Luke Hayes as Chief Financial Officer. Mr. McKee brings significant experience as CEO of publicly traded drug development companies to the role and had been serving as a member of the Board of Directors since January 2021.

The Company announced in February 2021 a collaboration with Jennifer Miller, M.D. of the University of Florida as the Principal Investigator for a Phase 2a clinical trial for eating disorders using Tryp’s psilocybin product. Dr. Miller is a leading expert in certain eating disorders including binge eating and hyperphagia and brings a wealth of experience in treating these conditions.

The Company’s total assets as of February 28, 2021 were $7.5million, including $6.7 million in cash. Net and comprehensive losses for the three and six months ended February 28, 2021 were both $2.4 million. The net loss for the period was partially due to a $956,360 write down to intangible assets, a non-cash expense resulting from a deliberate restructuring of the Company’s intellectual property portfolio. Tryp is prioritizing its intellectual property prosecution activities on a provisional patent filed in March 2021 that describes novel methods for the formulation, delivery, and dosing of psychedelics resulting in a potential reduction in the time spent by patients in the dissociative state. The Company expects to submit additional provisional patents in 2021 related to the manufacturing and formulating of psilocybin, among other innovations.

The Company has also engaged Native Ads, Inc. to provide digital media services, vendor management, marketing and data analytics services to the Company, and the Company has budgeted $425,000 for such services over an expected twelve-month period. Native Ads is a full-service advertising agency that owns and operates a proprietary ad exchange with over 80 integrated supply side platforms resulting in access to more than three billion daily North American ad impressions. Neither Native Ads nor any of its directors and officers own any securities of the Company.