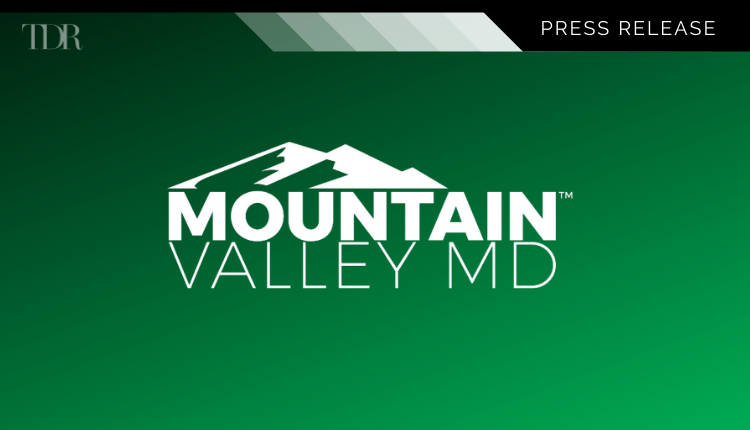 TORONTO, ON – Mountain Valley MD Holdings Inc. (CNSX:MVMD) (OTCMKTS:MVMDF) is pleased to announce it has achieved a water solubilized selamectin product using its patent-pending QuicksolTM technology. To date, selamectin was considered a virtually water insoluble molecule with tremendous potential in treating parasitic infestations in husbandry and companion animals, as well as mycobacterium-based infections including Buruli Ulcer, Leprosy and Tuberculosis.

MVMD scientists successfully solubilized selamectin at 15mg/ml into a water solution without any organic solvents, which it believes is a critical achievement to allow formulation into topical application creams, oral rapid dissolve sublingual tablets, and injectable applications.

We continue to accelerate our focus and efforts on solving the most significant human and husbandry animal health problems facing our global population. We are very optimistic that this breakthrough on selamectin will help MVMD pursue near term licensing and commercialization opportunities consistent with our business plan.

The Company has filed for trademark protection under the brand name SelactosolTM to support its continuing work within the QuicksolTM line of water solubilized macro-cyclic lactones. The Company has focused its initial efforts on already approved macro-cyclic lactones given its belief that they will yield the broadest commercialization opportunities in the shortest period of time.

Having successfully applied the QuicksolTM solubilization technique to the selamectin drug, MVMD will now proceed to formulate SelactosolTM 1.5% for preclinical evaluation trials of mycobacterium-based infections such as Buruli Ulcer, Leprosy and Tuberculosis.

“We believe this discovery to be a breakthrough that will enable the efficacy needed to treat respiratory infections such as tuberculosis by enabling the drug deposition into the airways and lungs through injections, aerosol formulations and pulmonary delivery,” stated Mike Farber, Director of Life Sciences at Mountain Valley MD. “We are anxiously looking forward to proving the efficacy of this breakthrough in multi-drug and extended
drug resistant strains of tuberculosis.”

Tuberculosis (TB) is a bacterial infection that can spread through the air and is a global disease found in every country in the world. According to the non-profit organization TB Alliance, it is the leading infectious cause of death worldwide. The World Health Organization estimates that 1.8 billion people – close to one quarter of the world’s population – are infected with Mycobacterium tuberculosis (M.tb), the bacteria that causes TB. In 2020, 10 million fell ill from TB and 1.4 million died – a rate of death of 3,836 people per day. The global economic cost of TB is estimated to reach over 16 trillion dollars by the year 2050*.

As the Company’s strategy is to license its intellectual property to global pharmaceutical, vaccine and nutraceutical third parties, MVMD believes this discovery provides additional advantages to potential licensees as it may enable them to obtain global regulatory approvals more quickly based on there being fewer approval steps required for immediate applications in human and animal dosing.

MVMD previously filed a patent application to cover all highly solubilized macrocyclic lactones, including ivermectin and selamectin, which have also been shown to be effective in the treatment of tuberculosis in vitro studies even with limited solubility. The Company believes its solubility technology will dramatically enhance the efficacy of selamectin and expand its treatment opportunities.

To read the original press release in its entirety, click here.