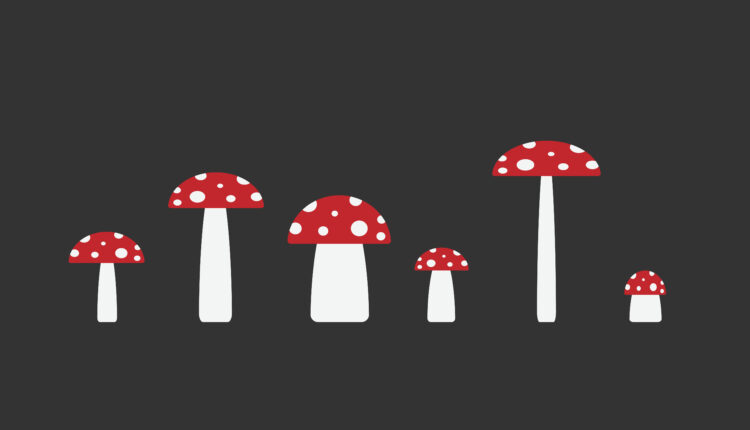 A certain red-capped and spotted fungus has long held the key to overcoming extreme obstacles, providing a sudden surge in physical capabilities, and has even allowed consumers to defy death in certain situations.

Nintendo’s Super Mario franchise defined a generation, and the one thing more iconic than the world’s most famous plumber was the magic mushroom that aided him on his quest to rescue Princess Toadstool.

While game developers likely chose to base the item’s caricature off of the Amanita Muscaria due to its distinct colorful appearance, the actual mushroom depicted could be the newest player in the booming psychedelic therapeutic space.

Also known as the fly agaric, the Amanita Muscaria is a psychoactive mushroom, and while consumers won’t instantly double in size (sorry Mario fans), it does have the ability to produce a wide array of hallucinogenic experiences.

Psyched Wellness (PSYC), a health supplement company promoting the expansion of medicinal and psychedelic mushrooms, is devising a way to make this particular fungus available over the counter.

Part of what makes the fly agarics unique is that while psychoactive, the mushroom does not actually contain psilocybin. Instead, the shroom’s psychoactive properties come from the chemical muscimol.

Psilocybin has been at the forefront of the recent shroom boom, with numerous clinical trials and world-renowned doctors supporting the argument that the chemical holds the potential to combat a wide variety of mental and degenerative issues in the brain.

The recreational usage of psilocybin, coupled with its clear impact on the human brain has created both medicinal and legal hurdles. Extensive research is ongoing to help override the taboo stereotype that society has placed on psychedelics, and medical and legislative acceptance of psilocybin could be slow to garner mainstream support.

Muscimol has seen a mere fraction of the attention, and significantly less research has been focused on the substance. Fortunately for Psyched Wellness, this has allowed muscimol to remain legal to both grow and sell.

Muscimol has only undergone a pair of clinical trials, one in 2000 and another in 2009. Scientists had hoped to use muscimol to combat epilepsy and Parkinson’s disease. Both trials were eventually abandoned due to a lack of funding.

Psyched Wellness is marketing the Amanita muscaria as a treatment for sleeping disorders and as a reductor of both stress and pain. In essence, the selling point is not far from the one seen with CBD products.

Psyched Wellness is targeting mid-2022 for the official release of AME-1, a tincture containing the extract of the Amanita muscaria. Following the release of the tincture, the brand will further develop the line to include teas, topical ointments, and capsules containing muscimol.

In fact, Psyched Wellness announced today that they had just made their largest extraction of the product needed to make the tincture, with a total of 4.2 kilograms of AME-1 being extracted from 20 kilograms of raw material.

As mentioned earlier, the Amanita muscaria can easily be purchased online, but Psyched Wellness looks to offer a more credible version of the product backed by science.

The mushroom itself is in fact poisonous, and while it is not commonly considered to be lethal, consumers can experience less than desirable effects ranging from nausea to seizures.

Having hired both the National Research Council of Canada and KGK Science, Psyched Wellness is making sure they do their homework to minimize the risks associated with the mushroom.

Psyched Wellness CEO Jeff Stevens is hoping this emphasis on science will further highlight the CBD-like characteristics found in muscimol, rather than have the public unfairly characterize the product as one that leads to a psychedelic experience.

“We’re not suggesting at all that this is something that you’d want to use on a macro level. We’ll be framing it as microdosing tincture to help alleviate stress, similar to what effect you might have from say, melatonin, or even a glass of wine.”