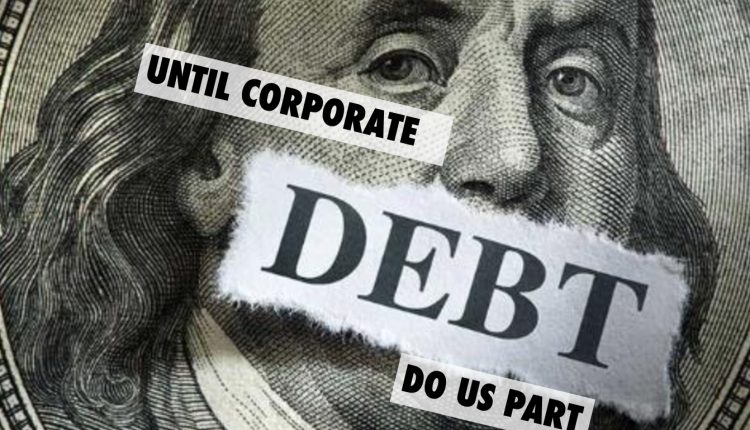 Until Corporate Debt Do Us Part

In 2008 the financial crisis was triggered by consumers binging on subprime mortgages, today corporations are binging on the cheap debt fed to them through a decade of historically low-interest rates.  The Washington Post cites that corporate debt in the USA is approaching $10 Trillion or 47% of the economy.  Alarm bells are ringing at the IMF, Federal Reserve, and financial institutions, but there is no slowing this debt train.  In September, US corporations sold another $200 billion in new bonds, a monthly figure not seen in more than two years.

Quality is bond one.  $4 trillion of these bonds, including $2.5 trillion, are labeled ‘BBB’ by S&P, which sit only one to three notches above junk debt.  How many of the companies that issued these bonds would have failed if they couldn’t drink from this near ‘free’ money well?

In the last five years, $3 trillion in bonds funded stock buybacks — balance sheet engineering versus reengineering the company to be more competitive.

Is corporate debt the next bubble to be popped?  Unlike the subprime mortgage crisis, banks aren’t leading the parade into lower-grade corporate debt.  The Pied pipers are primarily insurance companies, private equity firms, and hedge funds. That helps as the economy depends on healthy banks.

What matters is the growth of the American economy.  If it continues to perform, then the US. Corporations are in a better position to service this debt.

If the economy falters, the weakest link in the corporate debt chain, the BBB bonds could be downgraded to junk.  Most Pension funds and mutual funds would have to quickly unload any part of their portfolio that is junk status. Quickly unload is never an affirmative action when it comes to investments.  More importantly, the companies that borrowed like zombies will have to pay higher borrowing costs. When that happens, it will be the equivalent of ripping a band-aid off only to discover a festering wound lies beneath.  Many of those wounds will be life-threatening to those corporations.

What matters most to you?

As Benjamin Franklin said: “An investment in knowledge pays the best interest.”

So be prepared for this certainty.  Markets will go up and down.