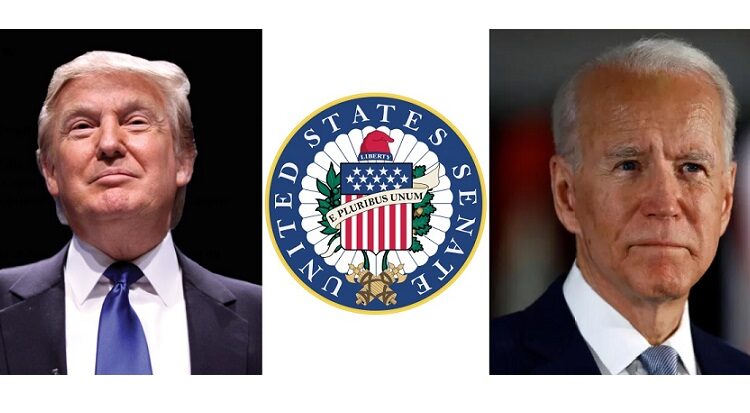 With the election heading into the home stretch, the time for discretionary portfolio maneuvering has long since begun. For cannabis investors, near-term volatility will be particularly acute since the victors of the presidency and senate will have an outsized impact on sector policy. TDR examines the different election scenarios and potential impact for investors in cannabis stocks post-election.

Looking to the polls for guidance, we come away with more questions than answers. On the topline, it would appear that Joe Biden is a strong favorite to unseat Donald Trump as president of the Unites States.

According to the Real Clear Politics National General Election Polls average, Joe Biden has a 7.8% lead over Donald Trump nationally, with no poll showing less than a 3-point lead on any individual basis. The widest variance on the top end is CNN, which has Biden favored by 12% over Trump.

But if the 2016 election cycle taught us anything, it’s to be wary of mainstream poll accuracy. Especially polls that called 2016 correctly yet are not widely cited by traditional media. For instance, the polling firm that predicted the 2016 presidential election correctly, Trafalgar Group, is tabulating results that wildly deviate from the mean.

According to recent tweets disseminated by the organization, Donald Trump is leading in several key battleground states that will likely decide election outcome: 2.5% in Michigan; 0.8% in Pennsylvania; 2.8% in North Carolina and Trump’s within 0.4% in Wisconsin. This is in contrast to the 2020 President: Consensus Electoral Map, which designates Michigan, Pennsylvania and Wisconin as Democrat “leans”, with North Carolina the only “toss up” state. This map aggregates the ratings of nine organizations to come up with a consensus forecast of results.

Another pollster that largely predicted Trump’s victory in 2016, center-right leaning Rasmussen Reports, reveals Trump has taken a 48-45% lead in Arizona according to a new telephone and online survey of likely voters. Arizona is the most prominent in-play battleground state in the U.S. west—although some feel the Republicans have an outside chance of capturing Nevada.

With alleged Hunter Biden improprieties implicating Joe Biden in pay-for-access schemes, Democrats are on the defensive. While it’s impossible to ascertain the impact these late-cycle revelations may have on voters, Donald Trump hasn’t been hit with anything of similar shock value down the stretch. In a close race, such scandals have the potential to sway outcomes by shifting undecided voter sentiment at the margin.

Whatever the case, below are five election outcome scenarios and how each result may affect cannabis stocks post-election.

Before carrying on we’d like to stress that, in our opinion, expectation of outcome is not a reason to panic or divest long term core positions. The sector’s macro growth fundamentals remain favorable regardless of who wins, and MSO valuations relative to revenue growth remain attractive. There are few, if any, simultaneous growth and value sectors on the market—especially ones heavily insulated from COVID demand shocks.

But investors should brace for heightened volatility as the election outcome will have a profound effect on near-term investor sentiment, policy expectations and timelines. This election will provide ample opportunity across many types of investing/trading disciplines to fulfill desired investment strategies.

Here’s how we see it playing out.

This is the most unfavorable result from a cannabis investor’s perspective and effectively reinforces the status quo. With Senate Republicans unwilling or unable to move SAFE banking reform passed by Congress last September in the current session, the measure hasn’t been a chamber priority. Most notably, Senate majority leader Mitch McConnell is a known cannabis detractor with the power to decide which measures come to vote. He’s likely to retain his seat this election cycle also.

Donald Trump himself appears generally agnostic on the cannabis issue. But we won’t know for sure unless a bill reaches his desk. A Republican Senate reduces the likelihood of that happening in a timely manner.

Through the Biden-Sanders Unity Task Force recommendations issued on July 8, Democrats are  recommending that cannabis be decriminalized and rescheduled through “executive action on the Federal level”. Republicans have promised no such action.

Verdict: Should Republicans win both the presidency and Senate, we expect the reaction in cannabis stocks post-election will be negative short term.

In this scenario, the cannabis industry would have a reasonably likely signatory of cannabis legislation, should the Biden-Sanders Unity Task Force recommendations hold true. However, Joe Biden could only encourage legislators on Capitol Hill to move on the issue. Assuming cannabis is even a priority for Biden—a man with scant record of past support in his 47 years in office—the Oval Office could exert some measure of influence through normal back channeling and soft coercive means.

However, we don’t expect Senate Republicans to play nice with Biden on most non-aligned issues. The potential to stonewall bills before it reaches the president’s desk is always present.

Verdict: Should Joe Biden win the presidency but Republicans hold onto the Senate, we expect the reaction in cannabis stocks post-election will be negative short term—although less so than the scenario above.

In this scenario, the cannabis industry would have proponents in both legislative chambers (Congress and Senate; we assume Congress stays under Democrat control). With Congress already passing the SAFE Banking Act in September 2019, the framework is already established to re-introduce a similar bill in the next session. Should a similar bill eventually make its way to the Senate, the legislation would stand a much greater chance of getting to the president.

Would Trump sign such a bill? We think so. If president Trump is anything, he’s a pragmatist. As a leader who is laser-focused on creating jobs and fostering a strong economy, Trump knows cannabis can play its part to help rebuild a COVID-ravaged economy.

With 66% of Americans in favor of legalizing cannabis nationally, and with Donald Trump entrenched in his second term, we think he will be a willing signatory of banking legislation that eases banking restrictions in the cannabis industry.

Who knows if outright legalization or de-scheduling is possible under this scenario, but we think significant progress will be made… eventually.

Verdict: Should Donald Trump retain the presidency and Democrats win Senate majority, we expect the reaction in cannabis stocks will be bullish short term with longer term tailwinds.

This is the dream scenario for most cannabis investors.

A blue Senate would have the power to pass SAFE banking-type legislation brought forth by Congress and get it to the president’s desk. In turn, Joe Biden would assuredly sign it and allow cannabis businesses access to traditional banking products and services. This may be enough to allow MSOs currently listed on the Canadian Securities Exchange to uplist to the New York Stock Exchange and NASDAQ—although we seek more clarity on this possibility.

Going a step further, Democrats would likely seek to legalize and/or de-schedule cannabis on the federal level, as stated in the Biden-Sander Task Force recommendations and communicated publicly several times during the campaign. Such action has the potential to open up vast retail channels in all 50 states nationwide. It wouldn’t happen overnight, but it would be a strong tailwind for the sector to build upon.

Furthermore, the cannabis industry would likely get much needed movement on IRS tax rule 280E, where deductions and credits for amounts paid or incurred in the illegal trafficking in drugs listed in the Controlled Substances Act are disallowed. This rule acts as an anchor on industry profits and affords companies lower valuations than they might otherwise receive.

Verdict: Should Joe Biden win the presidency and Democrats win Senate majority, we expect the reaction in cannabis stocks will be bullish on short term and longer term timelines.

This is by far the most unlikely scenario of the five.

For this improbable event to happen, Joe Biden and Donald Trump would each exit the general election with 269 electoral votes apiece. If no presidential candidate receives 270 votes, it triggers a “contingent election,” and the 12th Amendment tasks the newly-elected House with resolving who the next president will be. Although the new House will likely be controlled by Democrats, special rules for voting would actually put them at a disadvantage.

We’ll stop here because the House hasn’t picked a president since 1824. But given how wacky 2020 has been politically, you never know.