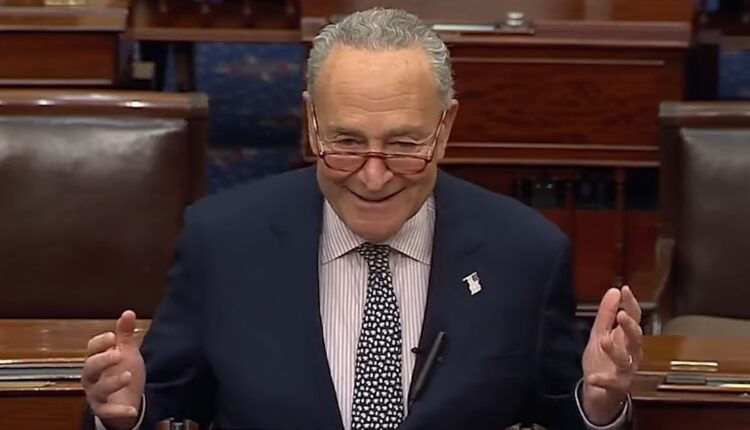 When the Secure and Fair Enforcement Banking Act (SAFE) was excluded from Monday’s omnibus appropriations legislation, Senate Majority Leader Chuck Schumer (D-NY) laid the blame directly on the doorstep of two Republican senators whom he felt stood in the way of placing cannabis banking into a large-scale spending bill that will likely pass during this ever-shortening lame-duck period.

Schumer lashed out at Senate Minority Leader Mitch McConnell (R-KY) and Senate Banking Committee Ranking Member Pat Toomey (R-PA). McConnell not only objected to including cannabis banking reform in the $1.7 trillion spending bill, but he also ripped into Schumer’s attempt to include the SAFE Act in the National Defense Authorization Act (NDAA) bill and made it clear he was going to scuttle any and all attempts to push it through appropriations.

Schumer, speaking at a Tuesday Democratic Senate leadership briefing, promised to “go back at it next year,” reported Marijuana Moment.

“We had very good bipartisan support. We had hoped to get it done. I worked for months with different Republicans, led by [Sen. Steve Daines (R-MT)]—but at the last minute, both senators Toomey and McConnell opposed it,” Schumer said.

“It is bipartisan. It has the support of many different groups. We’re going to go back at it next year.”

Schumer’s famous “last-ditch effort” to get cannabis banking into the spending bill was clearly too little too late despite his current lamentations.

Just ask NORML’s executive director Erik Altieri. “Democrats have promised action on cannabis consistently for the last two years, yet leadership consistently failed to prioritize and advance marijuana reform legislation, including legislation to provide clarity to banks and to provide grant funding for state-level expungements efforts, despite having several opportunities to do so.”

Following the unveiling of the massive omnibus bill, which lays out the federal budget for 2023, one wonders why lawmakers left out such an important and popular issue as cannabis banking.

The U.S. Cannabis Council (USCC) contends that the Senate’s inaction on
Safe Banking throughout 2022 will likely persist into 2023 and beyond, Schumer’s insistence notwithstanding.

“In failing to enact the SAFE Banking Act, the Senate missed an opportunity to pass one of the rare pieces of legislation that has the support of both Republicans and Democrats, along with the majority of the American people,” said USCC CEO, Khadijah Tribble. “Not only did the Senate squander a chance to score a bipartisan victory this year, its inaction threatens public safety and undermines the progress states are making in mending the racial inequities of the war on drugs.”