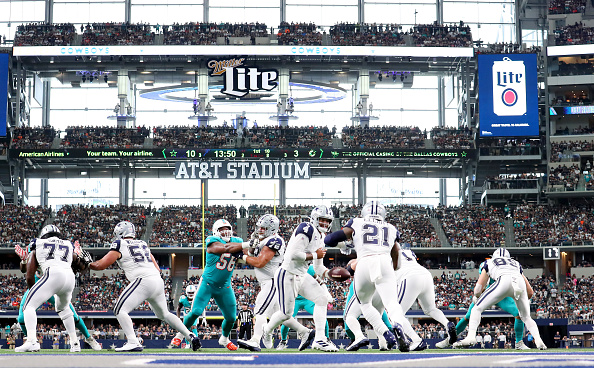 Before the COVID-19 outbreak halted its sort-of-debut season, the rebooted XFL — an alternative professional football league headed by wrestling magnate Vince McMahon — was at the very least pushing the National Football League to confront if not embrace the world of sports gambling.

In the meantime, however, the world’s most lucrative sports league struck a new collective bargaining agreement with its players that could eventually lead to the existence of brick-and-mortar sportsbooks inside its stadiums.

That would represent a massive leap forward for the NFL, which generally continues to pretend as though it doesn’t benefit significantly from the fact more than 38 million Americans — more than 15 percent of the country’s adult population — were expected to bet on the league’s 267 games in 2019.

It goes on to cover gambling revenues “generated by operation of gambling-related businesses located…in or physically attached to an NFL Stadium.”

These agreements cover as many bases as broadly as possible, but this is still a strong indication the NFL knows what’s coming.

As we stated last month, it’s arguably only a matter of time. More states continue to work toward legalizing sports betting, and the NFL — which now has a franchise in Las Vegas and a relationship with Caesars Entertainment — was reportedly looking to hire a vice president of sports betting this winter.

By no means will the NFL be a pioneer here. Last year, Major League Baseball commissioner Rob Manfred referred to sports gambling as a “great source of fan engagement,” adding that, “in general, we see it as a positive.” And NBA commissioner Adam Silver has never been shy about the realities of that industry. Way back in 2014, he wrote a New York Times op-ed that supported legalized sports betting.

Since then, 14 American states have legalized and regulated the industry to various extents.

But the sports world still often follows the NFL’s lead when tipping points arrive, and now the giant’s actions are speaking louder than its words.

It’s become clear that the leagues themselves are no longer in denial, privately or publicly. Combine that with legislative and societal momentum and there’s no slowing down this snowball.

This isn’t a fad, and it never was. Via fantasy sports, bookies, internationally-based online gambling websites and the rise of daily fantasy (DFS), millions of Americans and Canadians have been placing wagers on pro sports for decades. Only now have the leagues themselves become comfortable enough to ask for a cut, which combined with growing legalization should only help the industry blow up further.

It’s no longer taboo, and the risks associated with investing in the industry have shrunk considerably. The fact that the word “gambling” is used 34 times in the NFL’s brand-new CBA is yet another sign of things to come.